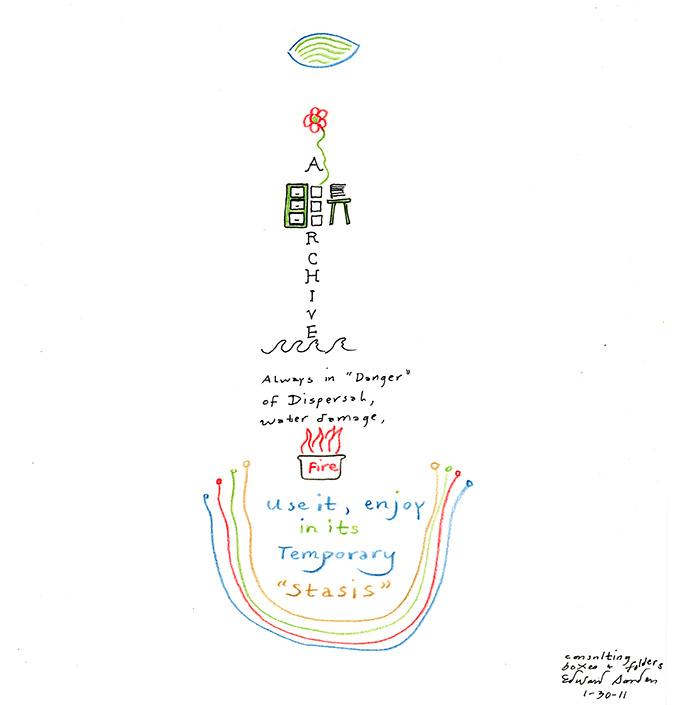 Image: Edward Sanders glyph from A Book of Glyphs, Granary Books. With permission.

Posted in Uncategorized | Comments Off on Upcoming: Saturdays at the Berg — parts III & IV 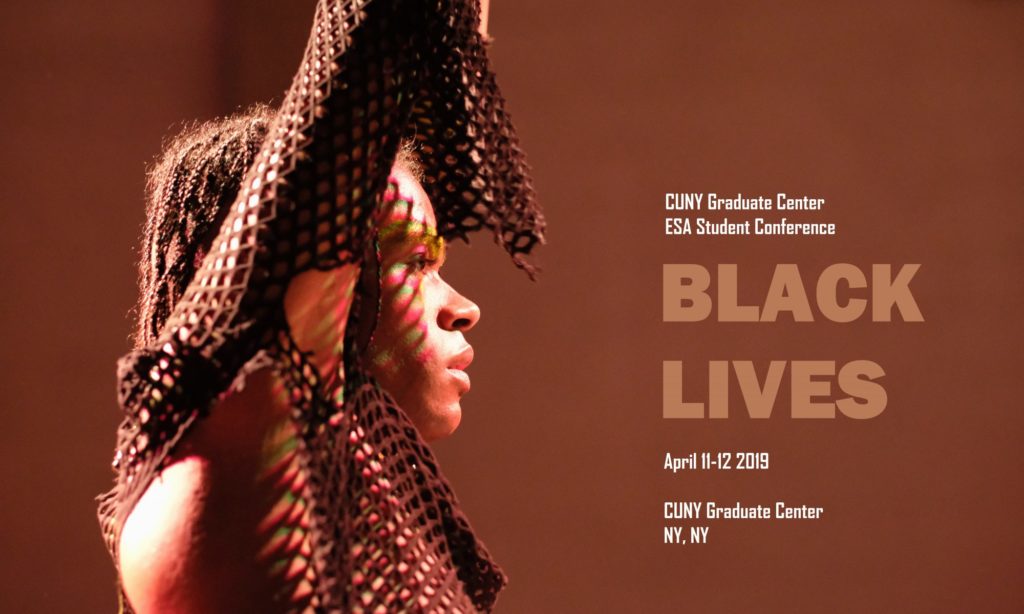 “Black Lives” has emerged in recent years as a conceptual touchstone following the wake of Black Lives Matter, a galvanizing social movement of public protest against the persistence of institutionalized forms of anti-black violence that besiege Black individuals and communities on a daily basis, both within the United States and across a range of geopolitical contexts. The phrase implicitly challenges nationalist and global concepts of humanity that do not include blackness as a viable sign of life and citizenship. As critics such as Paul Gilroy, Denise Ferreira da Silva, Robert Reid-Pharr and  Henry Louis Gates Jr. have noted, “universal humanism” has been historically built upon a constitutive rejection of black being. To push back against such entrenched conceptual repudiations of black particularity, we take a cue from Jamaican philosopher and novelist Sylvia Wynter, who argues that black particularity paradoxically retains a utopian impulse for recognizing “our collective agency and authorship of our genres of being human” (2006). We intend for the conference to respond to the urgent need to think about the impact and meaning of “Black Lives” both as a touchstone for contemporary activism as well as a scholarly heuristic for research across a range of fields and disciplines. By doing so, we hope to make resonant the potentiality of blackness to signify as a radical node of meaning and being across a range of identitarian and relational articulations.

We seek papers and panel proposals that take up any aspect of “Black Lives” understood broadly as an entry point into research in, but not limited to, any of the areas listed below. We are especially interested in workshop proposals that address the necessary rituals and habits for self-care, success/pushing back in a hostile workplace, building and maintaining your village, and contemporary radical Black artists/activists:

Please submit an abstract of up to 400 words, a short biographical description, and your contact information by January 30, 2018. Proposals and questions should be sent to conference organizers at blacklivesconferencecommittee@gmail.com.

Join us for Saturdays at NYPL: Open House for Archival Encounters at the Henry W. and Albert A. Berg Collection of English and American Literature. 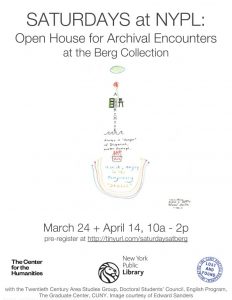 The New York Public Library, the Twentieth Century Area Studies Group, the Doctoral Students’ Council, the English Program at The Graduate Center, CUNY, Lost and Found: The CUNY Poetics Document Initiative, the Center for the Humanities and Primary Source: On Special Collections, Archives, and Libraries working group invite you to:

END_OF_DOCUMENT_TOKEN_TO_BE_REPLACED

Posted in Uncategorized | Comments Off on April 14th, 2018: Saturdays at NYPL – Open House for Archival Encounters

Breaking Through: Textures and Aesthetics of Rupture 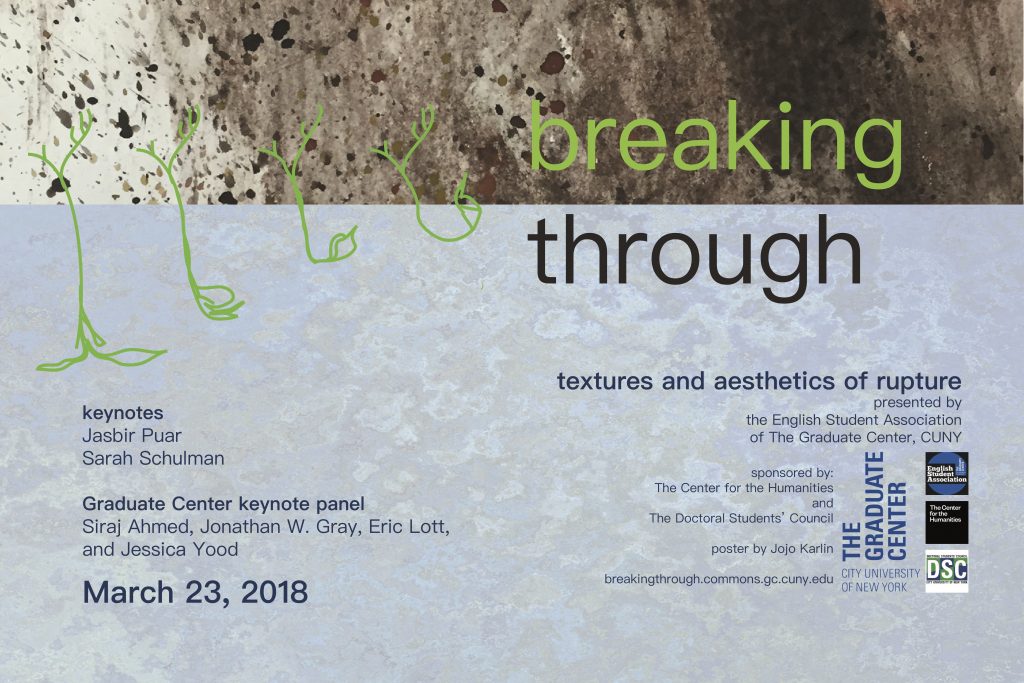 Posted in Uncategorized | Comments Off on March 23, 2018: ESA Conference – “Breaking Through: Textures and Aesthetics of Rupture”

Posted in Uncategorized | Comments Off on Saturdays at NYPL: Open House for Archival Encounters, March 24th, 2018

Over the last two decades, cognitive scientists working in embodied, extended, enactive, and embedded cognition have sought to understand mental processes in ways that take us “out of our heads.” In this paper Omri Moses (Concordia University, Montreal) argues that this new science of mind offers humanists a better entry point than we have so far found into productive cross-disciplinary engagement with scientists. By privileging the role that the body and physical and cultural environment play in organizing and constituting thought, it transforms our understanding of such supposedly “inward” meditative experiences as poetry reading into a more collaborative, individually tailored, and culturally situated activity.

Posted in Uncategorized | Comments Off on Summer 2017 workshops: works in progress

The Twentieth Century Area Studies Group is co-sponsor of this year’s English Student Association Conference – “The Vibrating World: Soundscapes and Undersongs” – on Friday, March 31st, all day. Open to all.

If we take seriously Jacques Attali’s claim that the world is “not legible, but audible,” what scholarly shifts are possible by turning our focus to acts of listening and representations of sound? Sound has long been represented in literature, philosophy, art, and science, but we are only now encountering a ‘sonic boom’ in critical and theoretical writings on sound in the humanities and social sciences. If we scramble our notions of language, what other sounds, voices, musics, or understandings might become legible or audible to us? We will consider the spaces between words, pauses between calls and responses, and the breaths and rests that produce multidimensional rhythms, harmonies, discordances, resolutions, and meanings, the undersong that carries the burden of a song, the chorus, the refrain.

Posted in Uncategorized | Comments Off on March 31, 2017: ESA Conference – “The Vibrating World: Soundscapes and Undersongs”

Need help with the Commons? Visit our
help page Send us a message
Skip to toolbar

Built with WordPress Protected by Akismet Powered by CUNY